Bulk Pricing:
Buy in bulk and save

The "Seneca" series is a turned copper projectile designed with the most demanding competitors in mind.  These projectiles are the epitome of performance with their high BC, lower weight and sleek profiles.  The bullet designs are all measured via acoustic chronograph and/or Doppler radar for the utmost in confidence of the equipment.  The bullets are designed to be used in a broad range of competition calibers and magazines.  As compared to other monolithics or hybrid construction projectiles these exhibit better form factors, better repeatability, lower weight and higher BC's.  Not only are the trajectories better with these projectiles but the overall performance aids the competitor in "shootability" with reduced recoil for the performance gained.

This bullet family has multiple patents awarded for the design.  Due to some of the patented features the designs are not only extremely efficient in flight but also very easy to load with conventional powders and standard chamber dimensions.  The bullets are designed with bore rider geometry for use of normal throat geometry.

Each bullet is individually turned on high precision lathes and measured to ensure the utmost in consistency.  These projectiles are not bulk washed/tumbled or other bulk-method processed to ensure that the sleek profiles are not damaged after machining is completed.

For example, using the 6.5mm 124gr Seneca and a conventional 130gr jacketed bullet design in comparison the Seneca performance allows a 6.5 Creedmoor shooter compete head to head with 6.5 PRC and other 6.5mm short magnum cases. This is a huge advantage in the overall cost of ammunition, cost of an additional caliber to reload, cost of a new barrel and bolt or a whole rifle, and increased barrel life of a 6.5 Creed vs. 6.5 PRC

*The average BC was measured using 10tw 5R rifled barrels and being shot at approximately 3100fps.  Different rifling geometry and muzzle velocity will affect the BC in a nominal manner.

TNF stands for Trajectory Normalizing Factor.  It is a simplification used to accurately estimate the potential of firearms trajectories across calibers and weight ranges without the complexity of running a ballistic calculator.

See the Patriot Valley Arms article on TNF. For example, with a 338 Seneca compared to a 300 grain jacketed bullet.

To equate that TNF value with the 300gr bullet it would need to be traveling at least 3,160 fps!  The smaller caliber is fully capable of running with even the biggest 30 caliber and 33 caliber magnum cartridges.

Test packages of 50ct bullets are available however the best pricing of course comes with larger volumes.  Volumes of 500pcs or more will be filled in bulk packages not in 100ct bags.

30c 178gr Seneca requires a 1:10tw barrel, it will likely not be stable from slower twist rates.  We cannot accept returns of projectiles due to liability reasons.

Starting load information should be based on conventional 200grain projectile information in published reloading manuals.  The bullets have shown good repeatability across a broad seating depth range.  We suggest loading the bullets 0.020" off the lands and starting load development in that area.

(No reviews yet) Write a Review 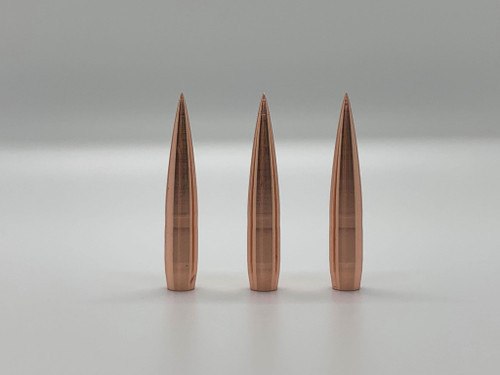